This took the form of the new $1.5 billion Support Package (not to be conflated with February’s Assurance Package increases) which helps steady our lower-income fellow citizens as well as our seniors against inflation..

“I fully appreciate how inflation affects everyone, and some Singaporeans more than others,” said DPM Wong.

“There are two groups that the Government is particularly concerned about,” he added.

“First, lower-income Singaporeans, who will find it difficult to cope with higher prices.”

“Second, retirees who have no income from work.”

The Deputy Prime Minister said that while this Support Package was designed with these two vulnerable groups in mind, the measures in it would also cover the middle-income segments, and provide some help for all Singaporeans.

What’s in this October Support Package?

There’s a one-off Cost of Living (COL) Special Payment of up to $500 in December, an additional $100 CDC Voucher this coming January, Public Transport Vouchers worth $30 and enhanced financial assistance for students. 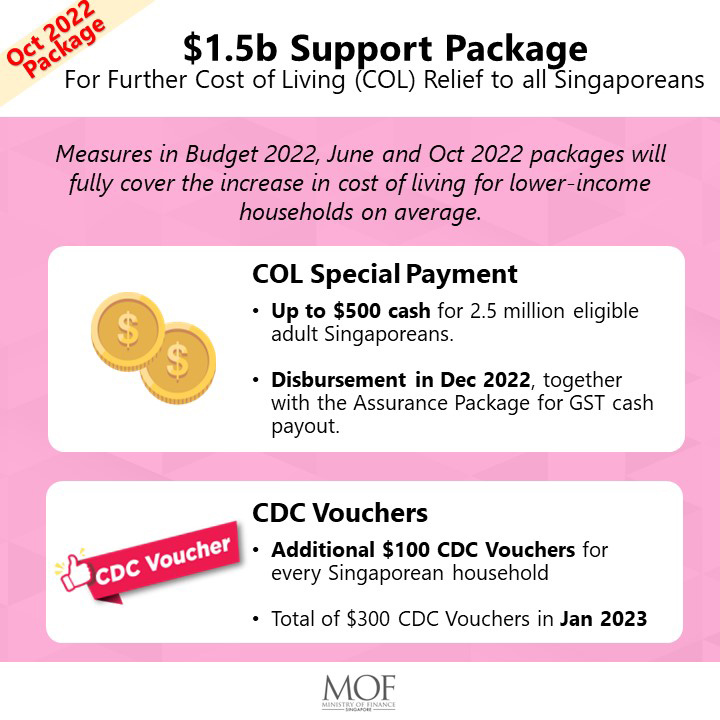 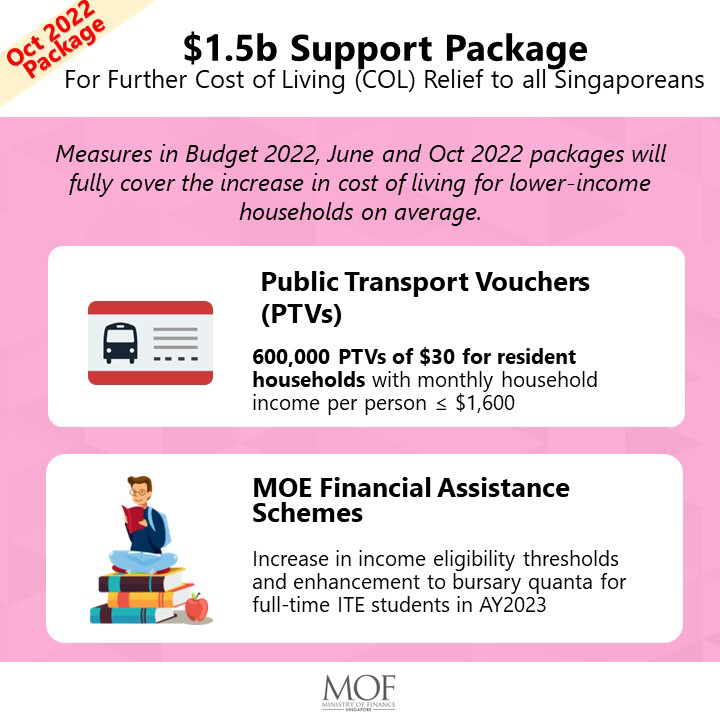 Also included: The PAP Government fulfilling its promise to look out for Singaporeans and step in when necessary, this time specially seeking the President’s concurrence to draw an advance from the Contingencies Fund so that Singaporeans can receive the October package in a timely manner.

This advance will be replaced within this financial year, said DPM Wong.

He added that the Government was able to fund this package without drawing on Singapore’s Past Reserves due to stronger-than-expected fiscal out-turn in the first half of FY2022.

“The Government will continue to live within our means and ensure fiscal sustainability,” noted DPM Wong.

In the bigger fiscal picture, this October’s Support Package’s COL support is a significant part of the total $3.56 billion of financial aid disbursed to Singaporeans against cost-of-living pressures in 2022.

“Just as what we have done during the last two-and-a-half years of Covid-19, we continue to draw on the strong foundation of solidarity and mutual trust in our society, to help one another get through this period,” said DPM Wong.

“We have each other’s backs.”